Transcript of Steve Harris' Appearance on the Rosie O'Donnell Show 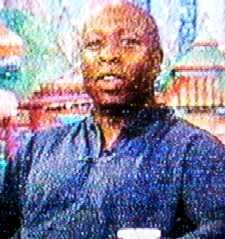 [Steve comes out looking quite handsome in a blue pullover sweater and black pants. He and Rosie hugs and he sits on the couch.]

Steve:     Everything is going very well. Very well. I’m a little disappointed, I thought that I would     be  running the firm by now. (laughing)

Steve:      I almost got it but they gave it to the guy with the blue eyes.

Rosie:      If you did hadn’t gotten him off for the murder thing, you would have been running the    firm.

Rosie:     You know Third Watch? You ever watch that?

Rosie:     The lead guy, they killed him off last week.  They didn’t even tell you that they were       going  to do it. When I was watching The Practice, I thought, well maybe his contract  was up.

Rosie:     So are you proud of your little brother, who was in Remember the Titans?

Steve:     Yeah! That’s my little brother right there (pointing to Wood in the photo – the audience    wildly applaudes). Yeah, ah I’m incredibly proud of him. He was also Jimi Hendrix, when  he played Hendrix on Showtime. And then he did Remember the Titans.  Things have  been going well for him. He’s out there doing his thang. I have to say I’m more  proud of  his  success than any successes of mine.

Steve:     Yeah, that’s right and he was at the Image Awards last  night. First time for him to  take  mom.

Rosie:      I understand that you recently spoke to your idol.

Steve:     Yeah, my idol being Sidney Poitier.  Yeah, as a matter of fact, he was honored at the     Image Awards inducted  into the Hall of Fame. I called his people because I  wanted  him to be apart of the show. Either direct or act  or whatever, I figured that I could  make   the Practice  do it. (laughs). One day I get a call in my dressing  room saying  that  Sydney Poitier was calling and I was like yeah right. But as soon as I heard his  voice I was  like “blahblahbah”. I mean I was literally speechless  and those who know  me know that is never the case. So, I  had to apologize, I told him that I had a better understanding of the English language. Eventually, I   did  meet him and it is very gratifying to know that someone you looked up to thinks that what you do is exceptional.

TRANSLATERS NOTE: From this point on Rosie and Steve began discussing how amazed that they are when celebrities that they admire actually know their work. For Steve it was Angie Dickerson (Police Woman) and for Rosie, Bette Midler.  Steve stated that some of his favorite actors were Sidney Poitier, Paul Newman and John Amos. He especially admired John for his role as James Evans in Good Times, because he projected a strong father image. Rosie asked Steve he knew that John Amos played Gordy the Weatherman on the Mary Tyler Moore Show. Which he didn't know.  Then they got into a debate as to which show was the best Mary Tyler Moore or All in the Family.

Steve choice:     All in the Family

Steve told Rosie that he would be working on a movie this summer with Steven Spielberg and her “Tommy” being Tom Cruise.  The name of the movie is Minority Report.  [Note: according the Hollywood Reporter, principle photography will begin in April].  Steve is planning a revival of the play “The Great White Hope” for Broadway next summer. He stated that his first and true love is the stage and is the reason why he got into the business of acting.