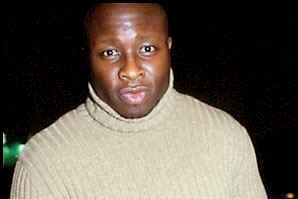 Thought you knew everything there is to know about Steve Harris?

Then try these fun facts on for size!

"Steve has always had the ability to put himself in the shoes of the character so that he portrays an individual, not stereotype." – Sarah Gabel – Excerpted from A "Smoothe" Ride on a Bumpy Road, Northern Now Online 1998

"My mother is wonderful. My mother and father helped raise me. I give them credit for whatever the best part of me and then the rest, I did on my own." Steve Harris on The View 3/15/00

Education: Attended St. Joseph High School a private Catholic school located in Westchester, IL; received a B.A. in Theatre Arts in 1989 from Northern Illinois University; and a Masters of Fine Arts degree in Theatre from the  University of Delaware in 1992.

Family Ties: Little brother Wood Harris aka Sherwin David Harris is the star of the Showtime Original Movie:  Hendrix  as well as Disney's Remember the Titans

Issues Close to Steve's Heart:  Fight against diabetes and issues dealing with youth.

THE FACTS ABOUT STEVE:

You asked for it and I aim to please. While surfing the net for Steve Harris related materials, I managed to stumble upon the following information  which was originally published in the Chicago Tribune Sunday Magazine on July 19, 1998.

The type of car Steve drives: A black 1993 Toyota

Steve stays home to watch: Football, basketball, Homicide: Life on the Streets, NYPD Blue, Fraiser, Spin City and Ally McBeal of which he stated “I’m starting to figure out what Ally McBeal is all about.”

Favorite pigout food: Meat. Some steak and potatoes and biscuits and gravy and his mom’s caramel cake.

Prized possession: Steve was given a black leather bag as a gift in which he carries all his stuff.

Steve’s Personal heroes: His father. And his first basketball coach, who’s motto was “PHD: pride, hustle, discipline.” And Sister Thomas, a black nun who taught him in grammer school.

Apparently in Japan people always think that he’s: Mike Tyson If there was one thing that Steve would do over: “I would have spent more time with my mom and dad and listened to them better.”

He would give anything to meet: General Colin Powell

In high school: People who knew Steve thought that he was a jock.

His most irrational act: “I tried to stop a robbery”

If he weren’t an actor, Steve would be: A professional football player

Steve’s most humbling experience: Dealing with a relationship that ended.

Three words that Steve feels that best describe him: Competitive, honorable and aggressive.